As many as 70% of web sites have vulnerabilities that could lead to the theft of sensitive corporate data such as credit card information and customer lists.

Web application attacks, launched on port 80/443, go straight through the firewall, past operating system and network level security, and right in to the heart of your application and corporate data. Tailor-made web applications are often insufficiently tested, have undiscovered vulnerabilities and are therefore easy prey for hackers.

Find out if your web site is secure before hackers download sensitive data, commit a crime using yourweb site as a launch pad, and endanger your business. Acunetix Web Vulnerability Scanner crawlsyour web site, automatically analyzes your web applications and finds perilous SQL injection, Cross sitescripting and other vulnerabilities that expose your on line business. Concise reports identify whereweb applications need to be fixed, thus enabling you to protect your business from impending hackerattacks!

Acunetix has pioneered the web application security scanning technology: Its engineers have focused on web security as early as 1997 and developed an engineering lead in web site analysis and vulnerability detection.

If web applications are not secure, then your entire database of sensitive information is at serious risk. Why?

Acunetix Web Vulnerability Scanner (WVS) is an automated web application security testing tool that audits your web applications by checking for exploitable hacking vulnerabilities. Automated scans may be supplemented and cross-checked with the variety of manual tools to allow for comprehensive web site and web application penetration testing. 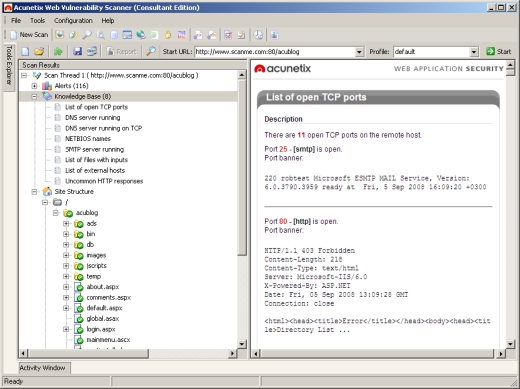 While scanning the website, scan also the web server for open ports and run network alert checks against network services running on the open ports such as DNS cache poisoning and recursion tests, SNMP weak community strings, weak SSH ciphers and many other network services tests. The network alerts checks are scriptable so you can modify them or write new ones yourself.

The state of the art CSA (client script analyzer) Engine allows you to comprehensively scan the latest and most complex AJAX / Web 2.0 web applications and find vulnerabilities.

Acunetix Web Vulnerability Scanner is able to automatically fill in web forms and authenticate against web logins. Most web vulnerability scanners are unable to do this or require complex scripting to test these pages. Not so with Acunetix: Using the macro recording tool you can record a logon or form filling process and store the sequence. The scanner can then replay this sequence during the scan process and fill in web forms automatically or logon to password protected areas.

Analyzes your site against the Google Hacking Database

The Google Hacking Database (GHDB) is a database of queries used by hackers to identify sensitive data on your website such as portal logon pages, logs with network security information, and so on. Acunetix launches the Google hacking database queries onto the crawled content of your web site and identifies sensitive data or exploitable targets before a “search engine hacker” does. 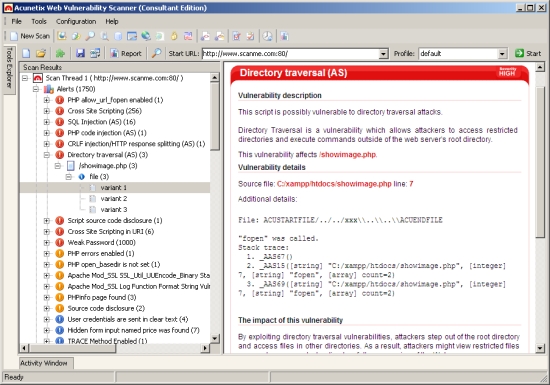 The advantages of AcuSensor Technology are many. These include: faster locating and fixing of vulnerabilities, whilst providing more information about each vulnerability, such as source code line number, stack trace and affected SQL query; it also checks for web application configuration problems, such as misconfiguration of web.config or php.ini files; detects many more SQL injection vulnerabilities without depending on web server error messages; and many more.

Finding the right web application scanner; why black box scanning is not enough

Acunetix AcuSensor Technology is a new security technology that allows you to identify more vulnerabilities than a traditional Web Application Scanner, whilst generating less false positives. In addition it indicates exactly where in your code the vulnerability is and reports also debug information.

To date, Acunetix is the leading and only Web Vulnerability Scanner to implement this technology. 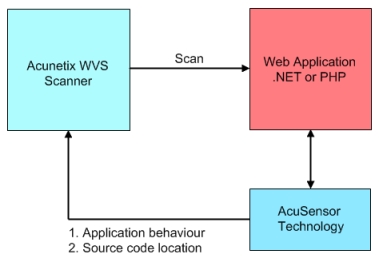 For the reported SQL injection featured in the screenshot below, the SQL query including the injected content which results into an SQL injection vulnerability is shown. The stack trace information is also displayed, to guide the developer where exactly the problem is. 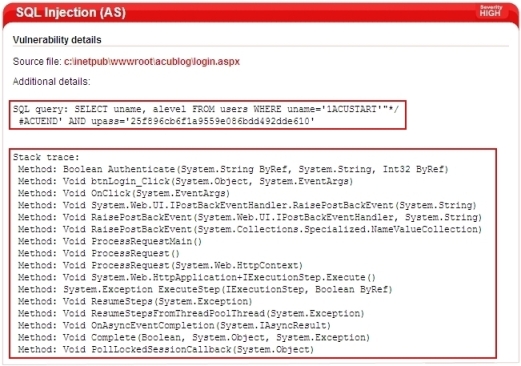 For the reported PHP code injection featured in the screenshot below, the vulnerable file name is displayed including the line number of the code which leads to the reported vulnerability. The injected code is also displayed under ‘Attack details’. 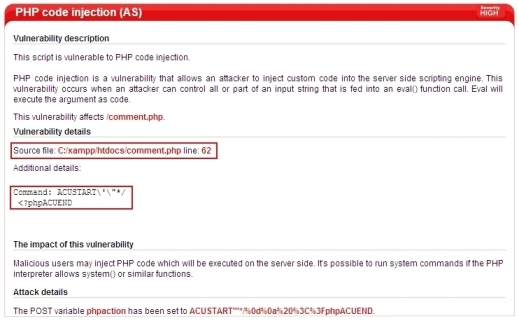 As seen above, using the AcuSensor Technology has many advantages. Apart from the above mentioned advantages, information provided by the AcuSensor Technology helps the developer trace the vulnerability and fix it in a much shorter time. It also helps them understand what was wrong in the code to allow such vulnerability to happen. From this, developers proactively learn more about vulnerabilities and it helps them in writing more secure code for future web applications and increases web security awareness.

Acunetix Web Vulnerability Scanner is available in three versions: A Small Business Version for onenominated web site, an Enterprise version to allow for scanning of an unlimited number of websites,and a Consultant version, which allows you to use Acunetix WVS to perform penetration tests forthird parties.

The Small Business Version is extended to those organizations owning and operating one website installed on a single server. Ideal for small businesses, this version allows you to scan 1 nominated website and cannot be used to scan sites of customers or third parties.

The Enterprise Version is extended to those organizations owning and operating more than one website. Ideal for larger organizations, this allows you to scan an unlimited number of websites and cannot be used to scan sites of customers or third parties.

The Consultant Version is extended to those organizations scanning any number of websites owned by their customers to provide them with penetration testing and vulnerability assessment services. Ideal for Security Consultants, Web Development Agencies and ISPs, this version also contains the Vulnerability Editor that allows you to create specific types of assessment tests and reports. The Consultant's version also allows you to personalize your reports by adding your own logo.